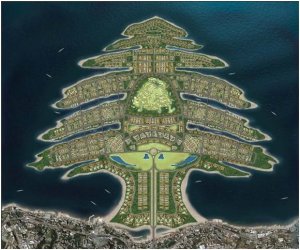 In my earlier posting “Hotel Barcelona”  I mention a coastal high-rise hotel that resembles the Burj al Arab Hotel in Dubai.

Well, here’s a Lebanese Cedar artificial island project inspired by Dubai’s Palms. I guess this is one way to make use of the tons and tons of rubble resulting from the disastrous Israeli bombardment of Lebanon two years ago.

Which raises the question: what sort of tree-island might eventually result from the recent–and seemingly ongoing–bombardment of Gaza? An Olive tree? No, somehow I don’t think so. Just one more reason (out of thousands that are much more important) the Israeli governent’s insanity must cease.

(Thanks to the lovely Darine Choueri for forwarding the image)