This is a screengrab of what appeared on my laptop recently when I downloaded a New York Times article titled “What You Can Do About Climate Change.” 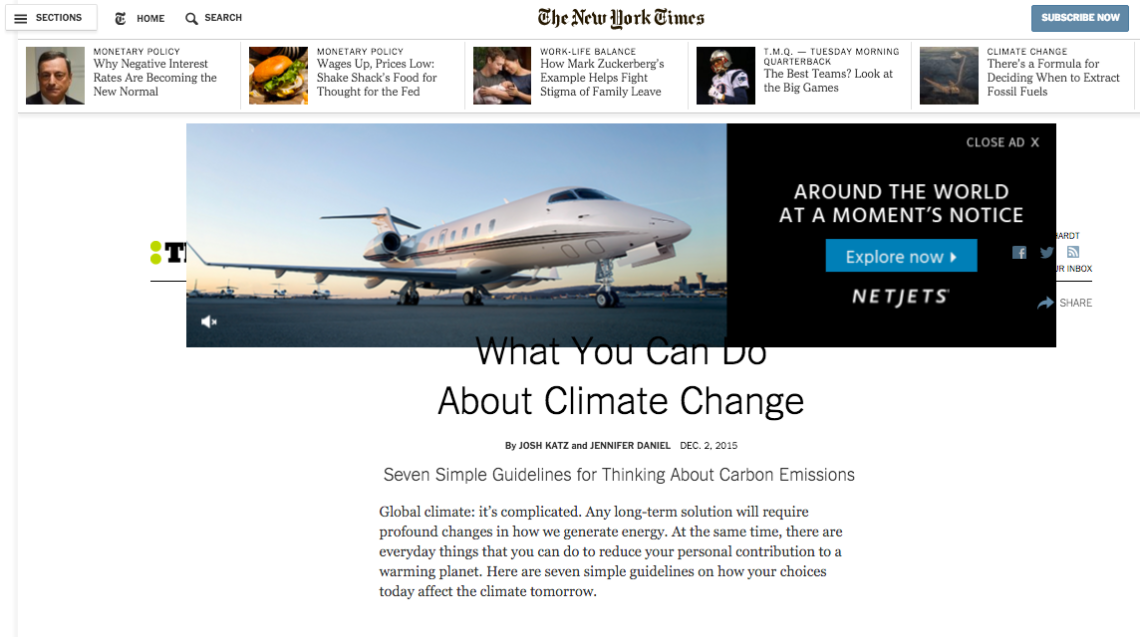 Yes, that’s a pop-up ad for a private jet that I had to close so I could read a series of recommendations on how to emit less carbon and do my bit to save planet Earth. In case anybody is wondering, no, I’m not currently in the market to buy or even hire a private jet for my urges to travel “around the world at a moment’s notice.” I have no idea why the NYT or Google Ads thinks I might be.

Upon reading the article, recommendation #4 struck a similar chord:

Fliers can reduce their footprint somewhat by traveling in economy class. First-class seats take up more room, which means more flights for the same number of people. On average, a first-class seat is two and a half times more detrimental to the environment than coach.

Oh, okay, I’ll make sure not to fly first class anymore. Not that I usually do, but that’s besides the point. What’s good about this recommendation is that it allows me to still feel like I’m doing something to help stop climate change without actually having to do anything. Perfect!

The recommendation not to own a second car (#6) also struck me as being somewhat superfluous. Or maybe I’m just not with this American-way-of-life thing?

The other recommendations are more practical: don’t eat red meat, avoid driving, don’t waste food, and shop less. But then I wonder if anybody who drives two cars and is used to flying and being pampered in first class is actually going to follow any of this advice. Makes me think that the whole climate change situation is being exploited as a big publicity stunt; as just another opportunity for corporations who manufacture jets, cars and other weapons of mass destruction to come across looking like ‘good corporate citizens’. Apparently, the Paris climate talks were sponsored by Air France, VW, and other multinationals. Plus ça change…