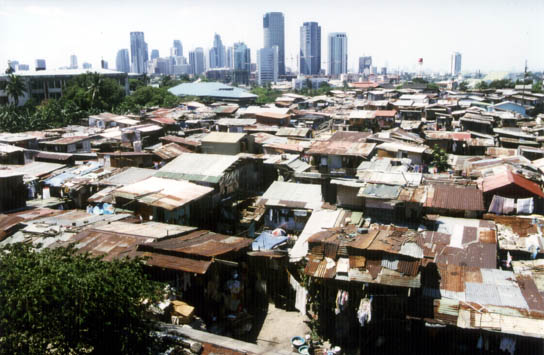 The above image is circulating on the internet accompanied by all sorts of captions of all sorts of cities on all sorts of continents, showing us how images, so easily appropriated and manipulated today, are deployed toward all sorts of ends, all too often sensationalist, demagogical, and misleading.

According to “Del Tirador a la Ciudad“, the architecture and design blog of El País, this image is of Detroit, Michigan. Last time I visited Detroit, in 2001, there weren’t any palm trees to be found, but who knows, maybe global warming has somewhat altered the flora of the Motor City over the last decade.

I suspect the author, Anatxu Zabalbeascoa, pulled the image from this post at Decrece Madrid, a grassroots environmentalist, anti-consumerist and anti-capitalist organization in Madrid calling for the “degrowth” of that metropolis.

In both of the above websites, this image of “Detroit” serves to highlight the built manifestation of extreme socio-economic contrast, which is certainly visible in this image, and which can certainly be seen in parts of Detroit. Except that this isn’t Detroit. Poverty in that city actually looks very different, occupying run-down 19th and early 20th century houses originally built for a white middle class that fled to the suburbs in the 1950s and 60s.