Architecture’s Prime Taboo, is one of its ‘Fundamentals’, too. 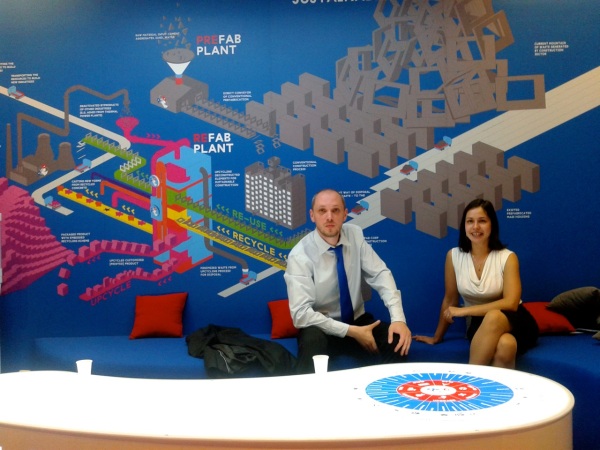 Russia’s pavilion at the 14th Venice Architecture Biennale, titled ‘Fair Enough’, is one of the few exhibitions in the entire Biennale that made me laugh out loud. And not out of ridicule. On the contrary: I laughed because it was poignantly satirical. It didn’t help that the exhibition’s staff, who successfully managed to engage the participation of many of the pavilion’s attendees, managed to keep a perfectly straight face while poking fun at architecture’s sacred cows, high priests, and grand poobahs.

Already at the front entrance, I knew something was up when I was greeted by an attractive hostess. For a moment I thought I had made a wrong toin in Albuquerque and landed instead at Berlusconi’s villa in Sardegna. But no, this was indeed Venice’s Giardini. Then, upon entering the foyer of the pavilion, everything became clear: I was attending an architecture exhibition in the format of an international trade fair. Fair enough.

Like any trade fair, ‘Fair Enough’ is a space filled with booths, each one promoting a commercial product. And in this case, that means architectural ideas, which we like to think of as enjoying a status high above the crassness of everyday commercialism. We thus discover that the most ‘Fundamental’ taboo of architecture has been broken, liberating us to revel, dance, and laugh out loud in our newly discovered freedom. Oh, and spend money, too.

Why not hire Chernikhov Creative Solutions for organizing your business’s modular shelving needs? And while you’re at it, stop off at Estetika to order some gold-plated decorative kitsch, and then on to the VKhUTEMAS booth to inquire about sending junior to its vanguard design school? And why not visit the friendly folks over at the Pre Fab Corporation to find out how they are doing before buying some shares in that multinational company?

Make no mistake: architecture is big business. How else could every real-estate developer suddenly have learned that if they hire a Frank, a Rem, or a Zaha to stylize their next behemoth, then its building permit application will be expedited, its excessive height ignored, and to boot, every magazine will publish it and every architecture critic (except this one, of course) will gush favorably about it. And thanks to architecture’s most fundamental and sacred taboo, nobody will dare to call a spade a spade. Until now that we have been liberated by a bunch of Russians. 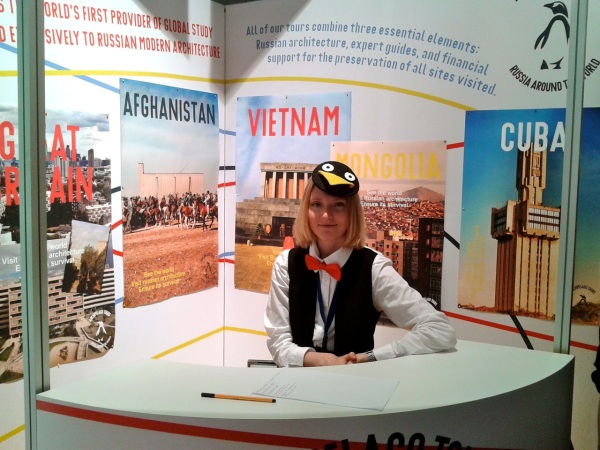 An adjacency between avant-gardism and kitsch?

Stand of the Russian Council on Retroactive Development