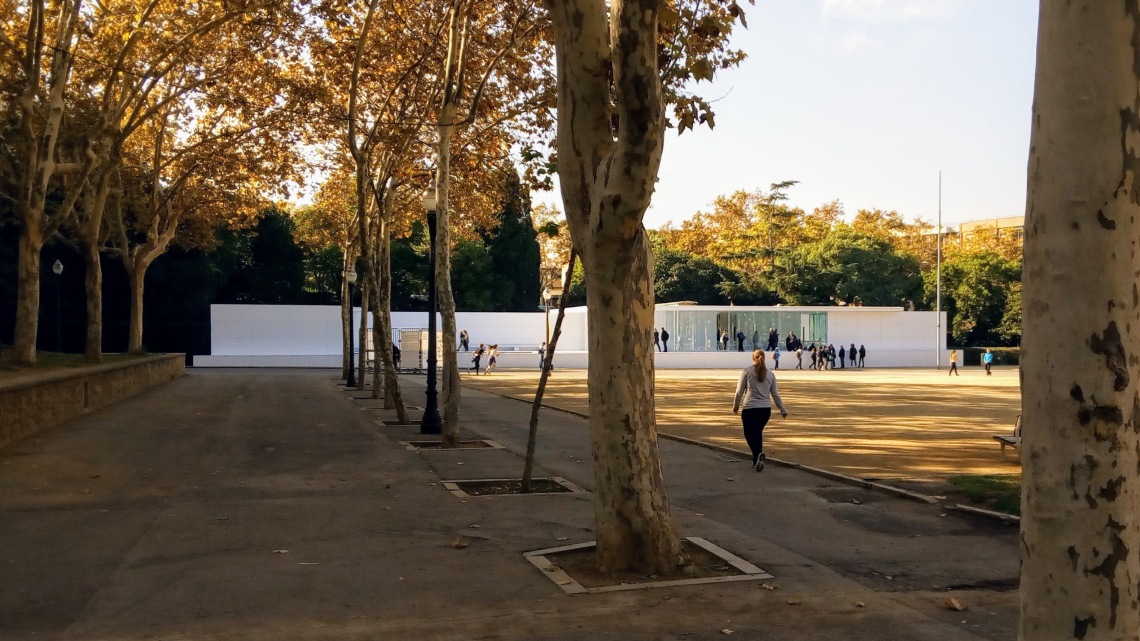 The Barcelona Pavilion is as white as Greek yoghurt right now. All the Roman travertine, ancient green marble, green Alpine marble, the golden onyx and stainless steel surfaces have been covered with white vinyl as part of an installation by local architects Anna and Eugeni Bach titled “mies missing materiality” (hereinafter referred to as “mmm”). The only surfaces that have been left unchanged are all the glass, the pools, and the ceiling, which is white anyway. The red velvet curtains and the black carpet have been removed, as have the famous chairs designed by Lilly Reich. The installation is coming down on 27 November, so if you’re an archi-tourist who is thinking of making the pilgrimage to Modernism’s greatest building this week, you might want to hold off.

As we know from having read William O’Doherty’s Inside the White Cube, white is itself a colour. The architects could have selected pink, orange, or black vinyl, but no, they chose white, coincidentally (or perhaps not) the de rigeur wall colour of every contemporary art gallery. Indeed, the pavilion right now looks vaguely like Richard Meier’s MACBA contemporary art museum situated not very far away.

But it’s the title that is curious, because vinyl is itself a material. For one thing, it’s highly toxic to the environment, and in this case, exactly 3800 m2 of removable vinyl adhesive film was used. Like paper, vinyl film comes in different weights, ranging typically between 120 and 150 g/m2 (a thicker, anti-slip and easy-to-clean vinyl was used to cover horizontal walkable surfaces, while a matt vinyl was used on vertical surfaces). That means around 500 kg of this stuff was applied to the pavilion. But no, we’re being asked to consider the application of half a metric ton of plastic as a “non-material” merely because of its uniform “non-colour”.

Hmmm. If you ask me, that’s stretching things a little.