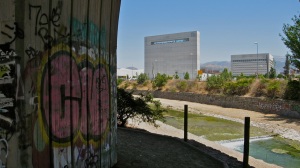 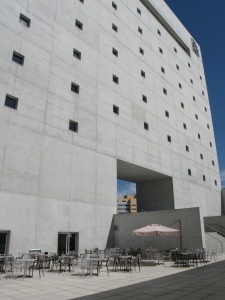 The Entrance Courtyard / the Elliptical Courtyard

Granada, the medieval seat of the Nasrid dynasty, whose rulers built the Alhambra, is a monumental city. But this monumentality ends abruptly at the edge of Granada’s historical centre: whereas the old city consists largely of courtyard corral housing and carmen villas with lush gardens, not to mention the famous monuments themselves, the modern 20th-century extension is made up of pretty much the same sort of residential, institutional and commercial buildings that can be seen anywhere.

When it comes to locating monumentality, suburbia is not usually the first place that comes to mind: symbolic importance has always been the stuff of centres more than peripheries. This doesn’t necessarily mean, however, that suburbia is completely lacking in monumentality. As César Daly wrote in 1864: ‘Suburban architecture reveals the spirit and character of modern civilization just as the temples of Egypt and Greece, the baths and amphitheatres of Rome, and the cathedrals and castles of the Middle Ages help us to comprehend the spirit of previous civilizations.’ Artist Robert Smithson’s A Tour of the Monuments of Passaic, New Jersey, as well as Robert Venturi, Denise Scott Brown and Steven Izenour’s Learning from Las Vegas each make a case for monumentality to be found in the periphery: Smithson in the form of infrastructure and industry, and Venturi et al in pop-vernacular symbolic building appendages that say ‘I am a monument’.

But these are interpretational readings of monumentality, not design projects. It was Oriol Bohigas who, during his planning directorship in Barcelona City Council in the early 1980s, recommended strategies that would ‘monumentalize the periphery’ through a serious approach to the architecture of new schools, hospitals, cultural centres and other public buildings and public spaces in that city’s outlying areas.

Granada seems to have heeded Bohigas’s recommendation, judging by some recently completed buildings in its urban periphery. Architect Alberto Campo Baeza’s CajaGranada Memory of Andalusia Cultural Centre is a monumentally monolithic and powerful building situated in a heterogeneous context at the very edge of the city, adjacent to an orbital motorway; the Río Genil; a crass office building whose claim to fame is that it is topped by Spain’s first revolving restaurant; a science museum; and the headquarters of the CajaGranada financial institution, an enormous concrete-and-alabaster ‘impluvium of light’ designed in 2001 by the same architect and to which the Cultural Centre is a carefully measured addition.

Dedicated to the rich and complex history of Andalusia, the Cultural Centre is a low, flat, elongated groundscraper that supports a tall, thin ‘screen building’ at one of its ends – the one facing the motorway. Carved out of the opaque groundscraper are two voids: a rectangular entrance courtyard adjacent to the screen building and an elliptical courtyard in the centre whose dimensions are borrowed from the round courtyard of the Palace of Charles V, a mannerist insertion amidst the sumptuous Nasrid palaces of the Alhambra.

Approached from a terrace overlooking the motorway and river, the Cultural Centre is entered through a portal in the screen building that leads down a generous stairway into the entrance court, a sunken, sun-bleached, ultra-minimalist space devoid of the shade-providing trees and cooling water fountains customarily found in Andalusian courtyards. The entrance courtyard provides access to both the screen building – which contains a café, a mediatheque, workshops, offices and a top-floor panoramic restaurant – and, on the other side, the groundscraper with its exhibition spaces and auditorium. It is here, where you enter the groundscraper at the intermediary of three levels, that the elliptical courtyard first becomes visible. This whitewashed exterior space, which acts as a central light well for the exhibition spaces, is equipped with a pair of circular ramps inscribed within the gently curving perimeter of the courtyard walls, recalling the Penguin Pool at London’s Regent’s Park Zoo by Berthold Lubetkin and Tekton.

An interior staircase and a lift connect the three levels of the groundscraper. Thus the ramps of the elliptical courtyard are not a vital component of the building’s circulation system, but rather a superfluous touch of baroque levity within an overwhelmingly solid and heavy beton brut architecture. This is in marked contrast to the more austere entrance courtyard, which is obligatory passage for everyone entering the building. Here, there is no relief whatsoever from the austerity of Campo Baeza’s minimalism except for a small collection of standard café tables, chairs and parasols that look rather silly in such a pure space. One of the elliptical courtyard’s ramps would be more than welcome here, not only to supply a bit of visual relief but also to provide a more dignified entrance to wheelchair users, who – to overcome the barrier posed by the wide stair descending from the screen-building portal – must descend a side ramp that circumvents the screen building altogether. The absence of trees and water in this space is equally baffling in light of how blessed Granada is with water from the nearby Sierra Nevada. Would a canopy of trees in this sunken courtyard compromise the monumentality of the architecture? Perhaps, but then again they would make the collection of patio furniture look less silly and more inviting.

If the entrance courtyard is uninviting, indeed alienating, this is not the case with the exhibition spaces, which are very conducive to an appreciation of the interactive multimedia exhibitions as well as to a temporary exhibition of art from the museum collection. The elliptical courtyard does not compromise the exhibition spaces in any way, but rather offers occasional views outside to another art installation of sorts: the shadow play of round ramps against elliptical walls under the bright Andalusian sun, which makes for quite a spectacle in itself, as will the gigantic plasma display on the screen building once it is installed. Another fine moment in the Cultural Centre is the restaurant, which occupies a transparent opening in the 6-m-thin screen building. The mullionless floor-to-ceiling glazing on both sides of the train car-shaped plan makes for a stunning panoramic view of the landscape.

But it is the urbanism of the Cultural Centre that is most convincing. The strong form of the ensemble of CajaGranada buildings seems to temper the heterogeneous suburban context. The shape and orientation of the monumental screen building makes an emphatic gesture to mark the physical edge of the city, not unlike the early theoretical ‘Edge of a City’ project by Steven Holl for a highly monumental ring of tall buildings designed to create visible edges for sprawling southwest American cities (published in Pamphlet Architecture #13, 1991). It is very unlikely, of course, that such physical ‘sprawlstoppers’ would ever work, but that is not the point. The real point is that the urban periphery is all too often treated too lightly, when what it deserves is to be taken more seriously. Monumentalizing the periphery with these kinds of punctual, strategic and strong forms is simply to make such recognition visible and architectural.