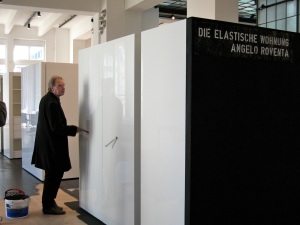 Angelo Roventa’s Elastic Dwelling applies a principle—and a mechanism—that is borrowed from a commercially available pre-manufactured industrial product: the high-density mobile storage system that is quite common in large archives, libraries, offices, and warehouses. The principle behind this product is quite simple: the ratio of useable storage space to circulation space increases drastically when storage cabinets can be moved sideways along a track such that only a single access aisle is ever open between any two cabinets at any given time. Space is completely optimized in such a system since circulation space (that all-important difference between net and gross) is reduced to only the location at which it is actually needed.

The Elastic Dwelling transfers this principle to the domestic realm, not in order to increase storage capacity or reduce circulation space, but rather to enable domestic “rooms” to be enlarged and reduced as needed. Instead of storing files or documents that are rarely consulted, the Elastic Dwelling’s mobile cabinets contain home furnishings which are used on a daily basis: there are cabinets containing beds, others containing a desk and bookshelf, and others wardrobes. Immobile cabinets at each end contain the “wet” functions of bathroom and kitchen. A generous lateral space from which the elastic rooms are accessed serves as the more public, multi-use living and dining room. All this allows, just as it does in archives and offices, for much fewer square meters to deliver the same level of performance. A saving of square meters entails a saving of construction material, energy, maintenance and, of course, cost. Space is money too.

The idea of space as something to be optimized probably worries some architects. I can think of more than one academic who would very likely disapprove of the Elastic Dwelling’s optimization ethos. Their refrain goes something like “optimization only serves capitalism and instrumental rationalism, which architects must resist.” But isn’t the proposal of a real, viable, and yes, financially feasible alternative to business-as-usual more constructive and effective in implementing change than mere resistance? The interesting thing about the Elastic Dwelling is precisely that it withstands some of the typical criticisms levelled at architects by the more conservative building industry. For example, the Elastic Dwelling does not rely on any expensive yet-to-emerge technologies: the high-density mobile storage system has been around for decades. Which raises an obvious question: how is it that no architect has thought of this until now?

The clues have been there all along. What is the most oft-repeated client criticism of architect-designed housing? “There isn’t enough storage space for all my stuff!” (“Hey, this is my way of forcing you to become less materialistic!”) It was a comedian and not an architect who gave us what is arguably the most accurate definition of a house: George Carlin and his famous line “a house is where you keep your stuff while you run around getting more stuff.” In a consumer society, a house becomes a storage depot of sorts, and storage technology is exactly what makes the Elastic Dwelling possible.

But storage technology is applied in the Elastic Dwelling in order to elastically accommodate the activities of everyday life in less space; not to store goods per se. The Elastic Dwelling’s ad-hoc use of a pre-manufactured commercial product recalls Charles Jencks and Nathan Silver’s 1972 book Adhocism: The Case for Improvisation, which celebrates a DIY hippy-culture of making-do-and-getting-by with the goods of an overabundant consumer society. Although some of the mobile cabinets are indeed used for storage, their larger purpose in the Elastic Dwelling is to act as mobile partitions. In fact, if there is one thing the Elastic Dwelling possibly lacks it is, ironically, storage space.

An important limitation of the Elastic Dwelling idea is that it is really only suitable for singles or couples at most; certainly not large families (“Mommy: Hans is shrinking my bedroom again!”). The Elastic Dwelling demands consensus when there are multiple dwellers in its interior, something that is increasingly difficult to achieve in these post-modern times. Flexibility, which has been the dream of countless architectural utopias, is a double-edged sword, since it is also potentially a cause of disagreement and difference. Perhaps the Elastic Dwelling is ideally a bachelor machine. But then again, households have become much smaller and taken on diverse forms in the last three to four decades, with “singles” forming one of the fastest-growing market segments. Small households must still all-too-often settle in relatively larger dwellings if they want all the comforts of a modern home. The Elastic Dwelling makes it possible for smaller households, especially singles, to occupy significantly less space without sacrificing comfort. In the end, the Elastic Dwelling optimizes quantity for the sake of quality.

When I studied architecture in Canada, one of the early design projects that we were assigned involved randomly picking three pre-manufactured construction-industry products out of Sweet’s Construction Catalogue and combining them in such a way that put them to new, never before imagined uses. The project was all about eschewing arts-and-crafts values in favor of bricolage and “adhocism”. I vaguely remember picking automatic garage doors, Pirelli rubber flooring and barbed wire, and transforming those into some sort of architectural sado-masochistic contraption (what else?). After seeing Angelo’s invention, I now really wish I had picked high-density mobile storage systems as one my three products, and that my attitude had not been so cocky back then. Perhaps then I might have thought of the Elastic Dwelling first.