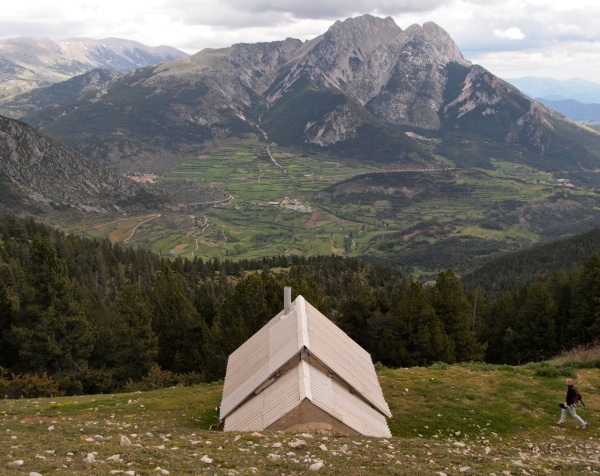 This building in the Catalan Pyrenees is a perfect example of the kind of “pure shit” that, according to Frank Gehry, constitutes “98% of everything that is built and designed today”. Yet another ordinary masonry construction topped with corrugated fiber cement board panels, the absolute cheapest roofing material on the market. Why are we even talking about it? This building is so badly designed, it doesn’t even have a single window where the view is; only a blind wall with a crappy door that doesn’t close properly. Yet another missed architectural opportunity. When will humanity finally begin to notice how much better the world would be if only architects designed it?

This building is so bad, that if a student were to design this in architecture school, they would fail miserably. Firstly, it has no concept; no overriding, overarching idea that challenges the status quo and poses difficult continental philosophical questions such as: why do we build? Nothing new is offered here.

Secondly, there is an utter disregard for the genius loci of the site. How is a passerby supposed to be made to confront their existence in the universe by means of such banal and insignificant form? Most people would just walk right past this building without ever taking notice of it. In fact, there’s a person walking past the building in the above photograph. See what I mean?

Thirdly, and this is the most serious criticism: There is no artistic intent; no ambition, no risk, no statement. What is being said here? Where is the contribution to the art of architecture? There is not even the slightest appearance of attempting to make something provocative.

If an architect had designed this building instead of a hack, then this place, this very special postcard-perfect place would surely be on the world map, and the local economy wouldn’t be so badly off. Instead of a crappy shed that is not even worthy of storing mountain bikes, this building could be a three-star Michelin restaurant directed by a world-famous chef, perhaps with an adjoining ‘lab’ as a tourist attraction for the hoi polloi. Of course, rooms would also need to be added for guests to spend the night, since it’s a long drive to BCN Terminal 1 when you’ve imbibed too much Priorat, and a road smooth enough for Ferraris to drive up would also have to be constructed. But it wouldn’t be a problem, because it would all be offset by the designer-designed building, which would be 100% sustainable and self-sufficient, and would blend perfectly with the landscape.

Instead, this plain, boring building just sits there, doing nothing.