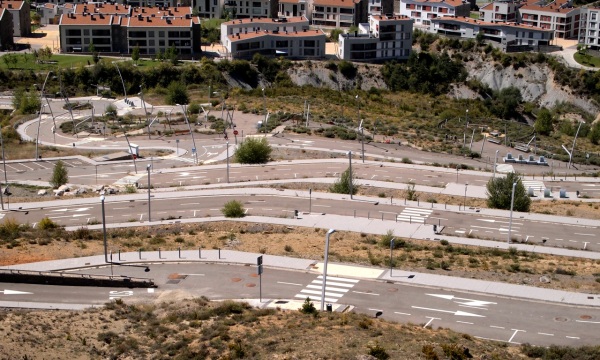 The land-scars of Spain’s construction boom-gone-bust have been documented photographically to great extent. More typically than not, these images portray a landscape of newly built but rather mediocre housing stock sitting empty; or else streets devoid of any buildings whatsoever and leading nowhere. Among the many failed developments throughout Spain, however, there are also some into which a great deal of architectural effort was poured, and which even went on to receive architectural prizes and distinctions.

The Las Margas ski and golf resort in Sabiñanigo, in the foothills of the Aragonese Pyrenees, is one such place. Everything there was attentively and carefully designed (by Bernabad Arquitectura, a young firm associated with the University of Navarra architecture school). The design vocabulary, seemingly inspired by sources as geographically varied as Alvar Aalto, Oscar Niemeyer, and Enric Miralles when he was with Carme Pinós, could be described as ‘urbane organic’: asymmetrically angled roofs, checkered facades, and a monumentally prismatic hotel sitting atop an organic plinth that blends with the golf-course landscape. The architects designed the master plan, the landscape, the street furnishings, and main buildings such as the hotel and golf club. Construction ground to a halt in 2008, however, the year that Spain’s booming property market went bust. A grid of building-less streets reveal the extent of the original master plan.

Although the hotel and golf club were operating on the sunny August day I visited, with a handful of golfers sinking some putts, a table in the bar-café occupied by a group of men wearing Lacoste, and two elderly women lounging by the side of the hotel pool, this place nevertheless felt eerily empty. ‘For Sale’ signs abounded on balconies of residential buildings, only a dozen cars could be seen in the streets, and I encountered few pedestrians while walking around the generously landscaped open spaces.

Emptiness is of course perfect for architectural sightseeing, but you know there’s something wrong when a Spanish holiday resort, in the middle of the August vacation period, lacks noise and commotion. Alright, it’s evident that this place was intended for wealthy ‘pijos’ and not the Magaluf crowd, but this place was too quiet even for an exclusive country club.

More worrying, however, was the state of disrepair of the public spaces. Although completed less than a decade ago, with trees having only recently reached maturity, the landscape is falling into disrepair rather than undergoing weathering. Stone masonry retaining walls were already crumbling, the four cascading artificial ponds were already having liner problems, and leaves, sand, and other detritus lay scattered about. I wonder if perhaps this wouldn’t be such a problem if the design were not so highly contrived and ‘perfect’ in the first place. Only the lawn showed regular upkeep, but then it wouldn’t be a golf club if it didn’t have a perfectly kept lawn. Ever wondered why it is that the architecture of previous centuries looks great in abandoned states of ruin, while contemporary architecture looks like shit with only the least bit of upkeep is missing?

The most surreal part of Las Margas is of course the one where the streets have no buildings. Here, arrows painted on the blacktop point in every direction, while crosswalk stripes link empty sidewalks. Hundreds of curvy street lighting standards designed by the architects themselves are positioned every few meters on both sides of the street, creating a sort of displaced and damaged Walter de Maria Lightning Field if you squint your eyes enough. Was so much lighting necessary? At night this place must be more brightly lit up than Belgium. That’s assuming these lights still work, of course.

Failed developments such as Las Margas dot the Spanish landscape. In this case, though, the failure is clearly more economic than it is architectural. Here, everything from the door handles to the city itself was designed –if not built– to a high degree of attention. It was all designed so perfectly, in fact, that its current state of ruin and semi-abandon makes it look all the more tragic. 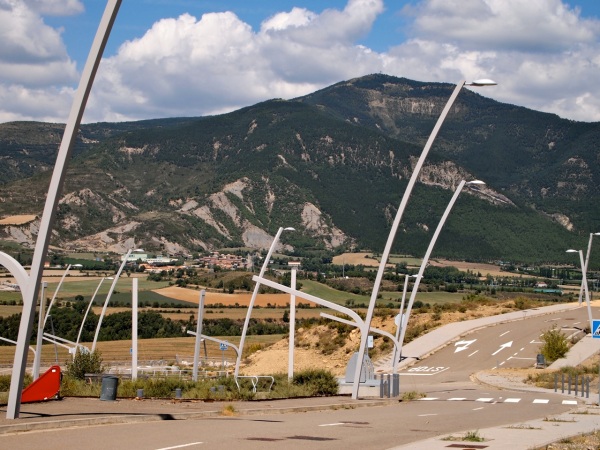